This is what I do when I'm supposed to be looking at cat pictures: 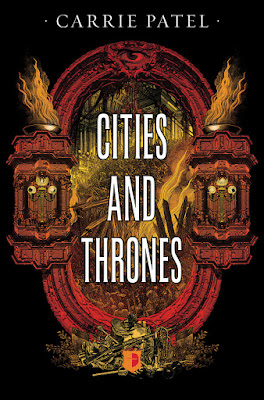 Revolution transforms the city of Recoletta. The new leaders dethrone the old oligarchs, open up the secret archives, and establish a new government based on change and transparency.

Months later, Recoletta is in shambles, the farming communes have revolted, and neighboring cities scheme against the crippled behemoth.

Inspector Liesl Malone, now chief of police, must protect her city from black market barons, violent insurgents, and the excesses of her new government. Meanwhile, Jane Lin has fled to the city of Madina, where she learns of a plot to crush Recoletta. Jane must decide whether—and how—to save her old city from her new home.

, and The Robot Trading Company.

Praise for CITIES AND THRONES:

"Ms. Patel has a knack in Cities and Thrones of providing just enough information for your imagination to grab hold and provide the rest. She’s also a master at nail-biting, non-stop action. Once you start reading, hold on tight because things are going to get really interesting fast. I recommend this series because it just keeps getting better."
– Popcorn Reads

"I read this book in one go, quite literally in one sitting. It’s definitely a worthy sequel."
– Bibliophibian Inc.

"Carrie Patel has created a world that’s so rich, so full, and so well-developed, that it’s incredibly easy to get lost in it. There are layers to the characters and layers to the world itself. It’s incredibly thought out and developed, and it’s so well-done. I’d revisit this world again for sure."
– In Case of Survival

"What I really loved (and respected) about Cities and Thrones is that Patel doesn’t pander to the reader, overwrite the story, or otherwise tell rather than show."
– Online Eccentric Librarian

"It’s all fascinating and interesting, and the aftermath of the revolution in Recoletta puts me in mind of some of the events of the French Revolution. Thus, the tangle of events here reminds me strongly of the novels of Django Wexler and Brian McClellan, especially when the plots of their novels focus on intrigue and city adventure rather than the flintlock fantasy war scenes. These three authors, McClellan, Wexler and Patel, all understand and illustrate that revolution and political upheaval are never, ever, smooth and easy affairs. There are countervailing forces, revanchist forces, radical elements, and the ordinary person *still* has to muddle along  and live the day-to-day life, sometimes in a very broken world."
– The Skiffy and Fanty Show 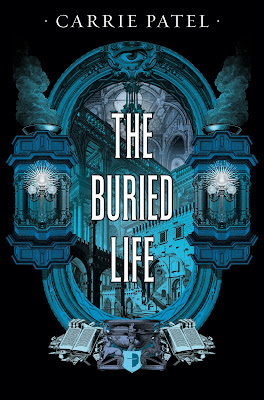 The gaslight and shadows of the underground city of Recoletta hide secrets and lies. When Inspector Liesl Malone investigates the murder of a renowned historian, she finds herself stonewalled by the all-powerful Directorate of Preservation – Recoletta’s top-secret historical research facility.

When a second high-profile murder threatens the very fabric of city society, Malone and her rookie partner Rafe Sundar must tread carefully, lest they fall victim to not only the criminals they seek, but the government which purports to protect them. Knowledge is power, and power must be preserved at all costs…


You can buy it from Amazon

, Barnes & Noble, The Robot Trading Company, or the bookseller of your choice.

Praise for THE BURIED LIFE:

"With Regency-era sensibilities and Agatha Christie’s flair for the subtle conundrum, Patel’s debut novel introduces readers to a subterranean city of the future, centuries after what is dubbed ‘The Catastrophe’, and beautifully manages the delicate balance between entertainment and social commentary. The subtly fantastical story is resplendent with surprisingly deep villains, political corruption, and a gripping whodunit feel."
– Starred Review, Publishers Weekly

"The Buried Life excels on many levels, quite apart from its presentation of strong female characters: it’s a cracking whodunnit with sufficient twists and turns to make Agatha Christie proud, a vivid portrayal of a vibrant multicultural society, and an intriguing love story."
– The Guardian

"This is one of the fastest paced books I’ve read in a long time. Patel wastes no time with excessive description or extraneous scenes, but still manages to convey a full sense of the world and its underlying implications. The stakes are always clear, transitioning effortlessly from scene to scene, and I found the story impossible to put down. Fans of fast-paced narratives should definitely give this one a look. The ending is perfectly set up, but only in retrospect: I didn’t see it coming, and the world is left completely upturned. In short, The Buried Life is a fantastic start to Carrie Patel’s new series, and this one is going straight onto my ‘Buy Sequel Immediately Upon Release’ list."
– Fantasy Book Critic

The flare gun is cold in my hands. I can’t shake the feeling that the little rocket inside is slowly dying.

Each day I watch the horizon, and each night I watch the stars. They can tell you a lot if you know how to read them: where you are in the world, how long you’ve been there.

When the abyssi are coming.

Sefid’s aura was the same luminescent gray as storm clouds. ‘‘You will not regret this.’’ Yet he said it in that tone that people used when it was certain you would.

"THE RATCATCHER" - Pillars of Eternity Universe

Desperate for a lead in her search for Persoq, Sagani visits a rural Dyrwoodan village full of secrets and grudges. She and Itumaak find themselves caught up in a murder plot.

"UNTIL HE STARTED SCREAMING" - Pillars of Eternity Universe

Novice wizard Aloth Corfiser is shackled to a patron he can't abide and an Awakened soul he can't silence. He finds unexpected allies among a student group of spellwrights, but what he learns about them--and what they ask of him--threatens the entire academy.