A good time was had by all at CONvergence this weekend. 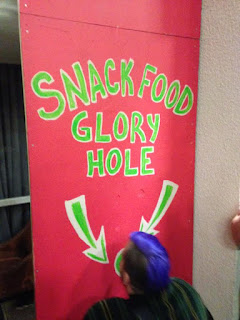 I'm just gonna leave this right here.
This was my second year going, and I don't expect it will be my last. And while I fully expected to enjoy catching up with old friends, meeting new ones, and participating in some fantastic programming, I was surprised at how much I enjoyed a Saturday evening panel called "Ready, Set, Flash!"

In this, Tor.com editor Lee Harris challenged C. Robert Cargill, Paul Cornell, Kelly McCullough, Melissa Olson, and myself to write stories in five-minute sprints while he entertained the audience and taunted us as we hunched over our sweaty, sweaty keyboards.

Kelly posted his contributions here, so I thought I'd share mine, too. All were written with the energy born of terror.


It came in the mail. A little package, something the neighbors hopefully wouldn’t have noticed. As if to spite me, the mailman had laid it proudly on top of my doormat.

I remembered searching for it, my hands sweating onto the keyboard as I clack-clack-clacked my queries into the search engine. I must have opened and closed the purchase page a dozen times, feeling someone watching over my shoulder.

I popped the pill into my mouth and swallowed. I heard her in the next room. “Is it working yet?”

And then I felt it. Something stirring. Reanimation.


I was kinda surprised that no one else went there...

It started as a rumbling. Something distant but growing nearer. The ground was shaking.

A whistle split the air, high and hot. Puffs of air like heavy breaths scattered across the horizon.

The movement became a deep moan of metal, gears nibbling across each other with tiny, sturdy teeth. Pistons roared, thrusting back and forth across axles and cogwork.

The train rolled over the tracks and passed by.

Trains. Yeah. Those are steampunk, right?

The little people had never much cared for the term. “Little” connoted things like “diminuitive” and “lesser,” and as they all knew, they were none of those things.

They was just as much to them as there was to anyone else, it was just concentrated.

The lobbyists told them they were wasting their time. There was no controversy, nothing to change, so why spend the money anyway?

But the lobbyists were lawyers, and so when they saw money on the table, they took it. They had that much in common with their clients.

CNN viewers scratched their heads at the coverage and the sight of all of these green-clad men and women marching across the floor of the senate, stepping up on podiums so that their voices could be heard.

At least it was something the Democrats and Republicans could agree on.

And with that a slew of signatures, they founded the Green Party.

Fourth theme: "Uncle Sam's Day Off" + mandatory use of the word "cocaine"

Well, you know where this is headed.

Uncle Sam scratched an armpit and rolled out of bed and made his way to the bathroom.

He looked at his bloodshot eyes, underlined with bags. Red and blue, indeed.

But there was something…

He leaned closer and dusted his beard. Was that… cocaine? Well, there’s the white.

He pulled a rumpled tee shirt over his gut and stumbled into the living room.

Iran was passed out on the couch. Britain was frying up some eggs. That guy knew how to hold his liquor.

He looked at the clock and remembered it was his day off. Thank goodness.

His phone was buzzing. It was China. Looked like China wanted a party.

Email ThisBlogThis!Share to TwitterShare to FacebookShare to Pinterest
Labels: conventions